We are exactly one month out and it appears our bracket is relatively set for the Indiana IFPA SCS Tournament on February 11th, 2017 @ Main Street Amusements! We are still waiting to hear back from one more person that could move the seeds around a bit, but wanted to get this posted out there for everyone as soon as possible. Online Bracket

Below is a sample score card. 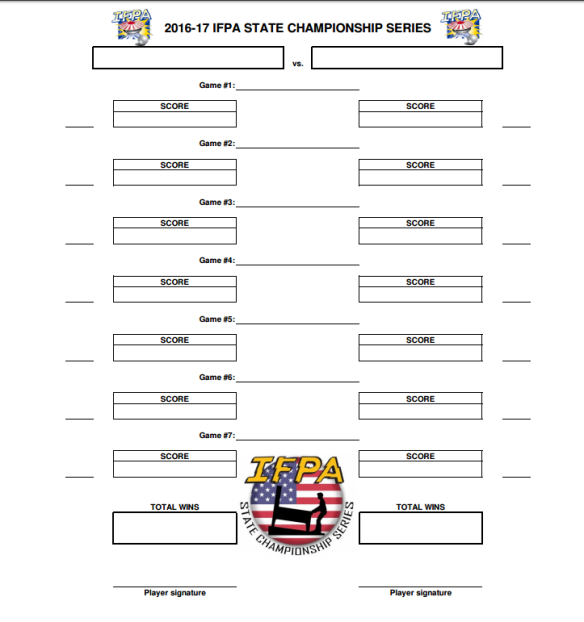 Each match will be a best-of-seven. The higher seeded player will have choice of machine or position for the 1st game, with the loser of each subsequent game having choice of machine or order, until someone has won 4 games. A machine may not be played more than once in the same match unless there are less than 7 machines available. If that is the case, only after all machines have been chosen can either player select that game to be played for a second time within the same match. Once a player verbally announces their game choice, or chooses position, that decision will be locked in and cannot be changed.

Each player will have the opportunity for 30 seconds of practice time before starting every game of every match. This is to ensure that both players have a chance to get familiar with the machine.

The winner of the match advances to the next round, while the loser is eliminated.

The 3rd/4th place Consolation Final will be played as a best-of-three instead of a best-of-seven like all other rounds, using the same rules. All other finishing positions will also be played out in best-of-three matches to also determine 5th through 16th place.

As of right now the plan is for most games on the floor of Main Street Amusements be eligible as a game selection with the exceptions of Star Wars: Episode 1, Medieval Madness, and The Big Lebowski. The lineup at MSA is subject to change pending any additions, or subtractions of games as well as the possibility that a game has any sort of playability issues.

More details to come in the near future!