Lafayette Pinball League wrapped up the regular season last night after 10 grueling weeks of qualifying. Finishing at the top of the heap is Keith Alyea who will head into next week’s finals as the #1 seed in the tournament. The rest of the finishing positions can be seen below along with last nights results.

Following IFPA’s newest rules you had to have participated in at least 5 out of the 10 weeks of regular season to play in the finals next week, this will leave us with 11 competitors vying for the coveted award. Reminder for the finals tournament there is a $10 entry fee. The money collected is used to purchase awards for the top 2 finishers as well as prize money for the top finishers as well. The tournament is run in double elimination format, and each match is best of 3 throughout both the winners and losers bracket. That means even a loss in the first round does not eliminate you from coming all the way back and still having a chance at ultimate victory in the finals. Matt is looking to continue his reign as champion, while Tom, Keith, and Tommy all hope to reclaim their former glory, and several others strive for their first shot at championship gold! The bracket as it sits is below pending participation of all 11 competitors. Remember that finals usually runs later than most of our league nights so come prepared for a long, fun, competitive night of pinball! Tournament Bracket Online 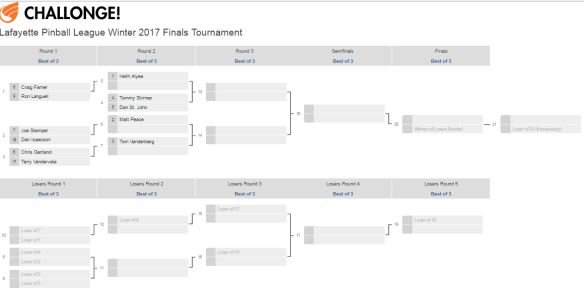