Lots of pinball activities this month!

Tournaments at Main Street Amusements are December 4th, 11th, and 18th! All MSA tournaments will start at 7:30!

North End Pub’s December Selfie Tournament has kicked off and features Baywatch and Indianapolis 500! Look for the flyer below posted on the games so you know what to play. Also because of the holidays you only have until Dec. 22nd to get your scores in, finals will be December 23rd!

December 16th is the Indiana Matchplay State Championship at North End Pub. The tournament will start at noon, is limited to 40 players. There are only 17 spots left as of this morning, go here to get your tickets.  Read more about the responsibilities of the champion here. The tournament will run from approximately 12 PM – 5 PM.

The winner will become the inaugural Indiana Matchplay State Champion and must defend the title every month. Here is what the championship belt will look like. 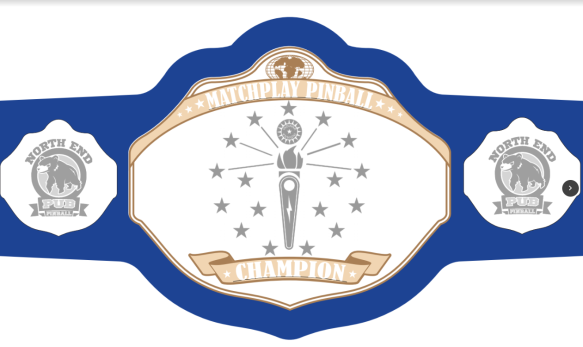 Following the conclusion of the Matchplay State Championship, we will have a special two-hour time limit Matchplay tournament to coordinate with the WWE TLC Pay Per View special that will run approximately 6PM – 8PM. Top 4 players after those two hours will face off in a 4 game PAPA format final. The new champion could even choose to defend the title in this event if they so wished.

Hopefully, everyone can make a few of these events this month and I really hope the State Championship Belt becomes something fun for pinball in Indiana again in 2019!