Matt Peace successfully outlasted the field of nine players including our friend from Germany, Torsten, to claim the May Championship!

Torsten played in a monthly tournament with us last year while visiting the United States on business, it was his first competitive pinball event. He went on to place 8th out of 208 players at the German Pinball Open Classics Division, and then again this year he managed to place 13th out of 174 at the same event. Needless to say from a person having never played he has quickly moved up in the rankings to 848th in the world in just one year of competition. It was great to have him back for another visit, and Torsten finished in 5th at our event.

In the final match of the evening Matt defeated Bob Skinner, who made his 2017 debut in the Lafayette Pinball scene, and finished his night with only 1-strike. He squeaked by Tommy on Captain Fantastic by 160 points to hand him his second strike, before stomping him into the ground on Black Knight by tallying up nearly 3 million points knocking Tommy out in a third place finish. Ron would come in 4th on the evening to round out the top 4.

Due to some slight miscommunication on my part, I forgot to go pick up the donated prizes from our official sponsor the Lafayette Brewing Company (sorry everyone, my fault), but we have rectified everything and we will be right back on schedule for next month’s tournament which takes place on June 20th at 8PM. I’ve made up a few flyers that you can feel free to share with friends for the event and/or via social media.

Also don’t forget our Spring Season concludes with our Finals event next Tuesday, May 23rd, with our double elimination format tournament. See you all there at 7PM! 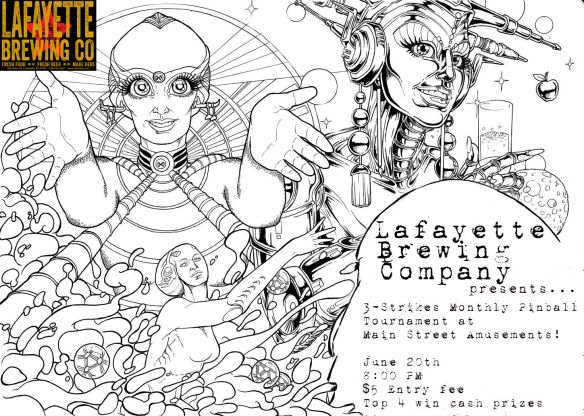 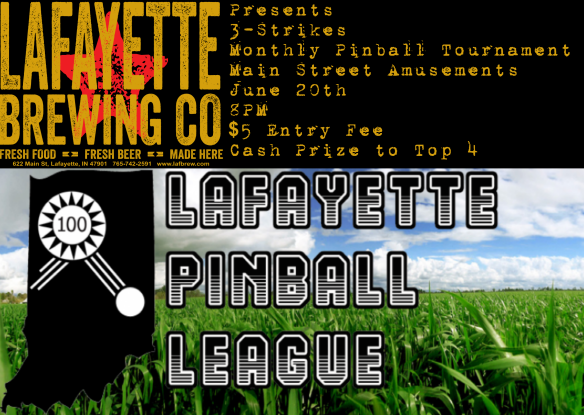