Hey Everyone! Just a reminder that if you are looking for a casual pinball league that has food and drinks available and some decent machines to flip on look no further than North End Pub’s Pinball League which kicks off Season 3 tonight at 8PM. The cost to join is FREE!!! You play 4 games in a group of 4 people, scoring is 4-3-2-1. PinPortal is the website we use to run the league and enter scores. 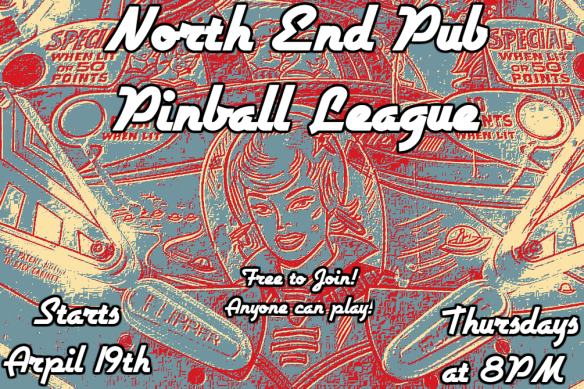 North End Pub (formerly Jerilee’s Pub) is located at 2100 Elmwood Ave attached to Market Square Lanes. They have pinball, pizza, wings, and most importantly BEER! Grab a bunch of friends and head down for a night of cheap fun and entertainment! If you know you plan to attend and haven’t previously played in a pinball league there before shoot me an email tsskinne@gmail.com with your first and last name and I will get you registered in the system ahead of time so you are ready to go. Expect to spend about $2.00 in quarters playing pinball, and bring however much extra you want to spend on food and drinks.

I can’t recommend the Honey Hot wings enough! Hope to see a lot of you there tonight!

The league runs for 6 weeks and you earn official IFPA (international flipper pinball association) WPPR (world pinball player ranking) Points just by participating. The season will conclude with a tournament open to novice players seeded based on your points earned during the season and we award the best Mug Trophies around!